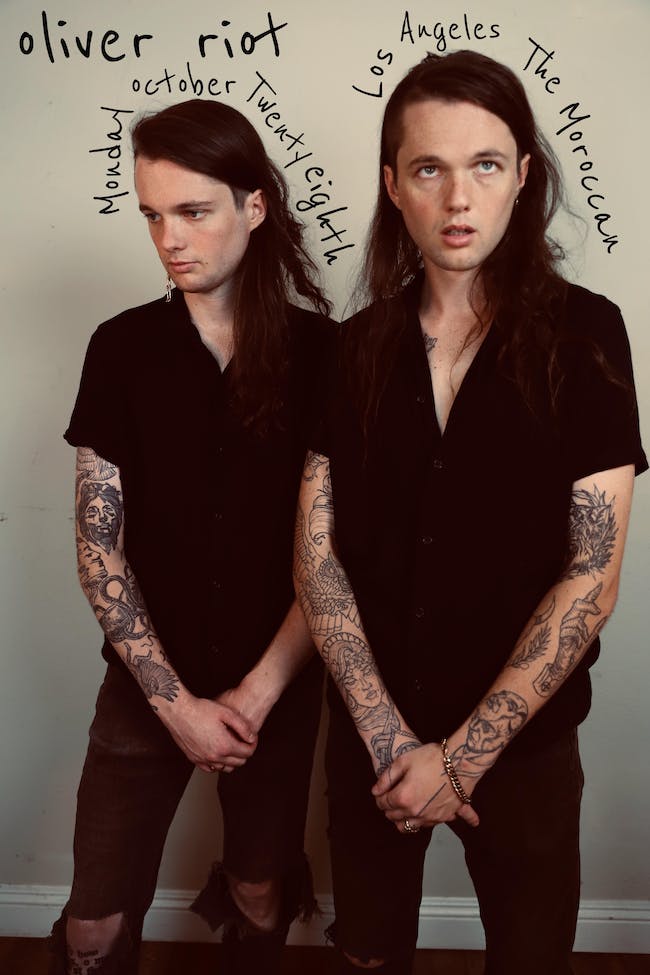 Oliver Riot -- comprised of twin brothers Benjamin and Alexander Moore -- are steadily making waves in the music scene with a string of accomplishments and upcoming features including performances with Tom Walker, Sam Fender, Frenship, Benjamin Leftwich, Nikka Costa and Kevin Garrett. They have had press and radio coverage from KCRW, BBC Radio 1, EARMILK, Indie Shuffle, Nylon, and many more publications. Their tracks have already accumulated over 80 Million plays on Spotify including their first single, Ivory Black which reached 15 million plus plays alone. Their music was featured on Riot Games, League of Legends championship video that got an estimated 30 million views worldwide and syncs on various TV shows. They have played to packed rooms at prestigious Hollywood venues including Moroccan Lounge, Key Club, Hotel Cafe and Itsaschoolnight at Bardot. They have been featured on Sofar Sounds three times and performed the Beverly Hills Gibson showroom, following the commencement of their current sponsorship from Gibson. Special guests included guitar icons, such as Robby Krieger of The Doors and Deryck Whibley of Sum 41.

In November 2015 Oliver Riot released their debut EP, Hallucinate, produced in its entirety by accomplice "Real Miilk” in the back of a 200 year old church in Los Angeles. Alexander lived in his van parked outside of the church while writing Hallucinate, and the brothers ultimately moved into the church’s back room to record the album from inside its aging walls. Currently, the duo has moved from the church, purchasing their first house in LA. The twins recently released their second highly anticipated EP, Neurosis, which has been creating quite the buzz, and re-tweeted by celebrities such as Chloe Grace Moretz. Recently featured in InStyle magazine with a mention from Sophia Bush as an artist she adores. They are in studio working on their third release. Their forthcoming single “Nervous” comes out in September 2019 and is produced by Eric Palmquist with strings by Thomas Lea.