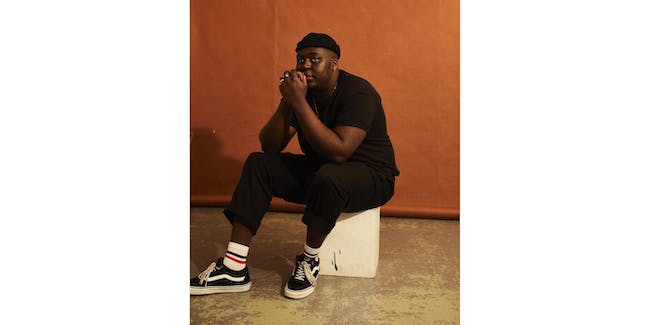 Like the soul greats he grew up with and the grime artists he adores, Jordan Mackampa makes music to tells truths as much as entertain. His searing songs are documents of his life as an outsider, his sound a melting pot of cultures that stretch from his birthplace in the Republic of Congo to a hip hop-obsessed childhood in north London to teen years spent immersed in indie-rock in Coventry.

From his breakthrough in 2017 with the protest song "Battlecry" to this autumn’s acclaimed "What Am I", hailed a modern take on Marvin Gaye’s "What’s Going On", Jordan’s powerful message music has grown rapidly in scope and scale, soaking up new influences and becoming more complex.

“You’ll hear the Congolese influence across the album,” says Jordan. “It’s there in the rhythms, in the swing and syncopation that ties the tracks together. It’s a sound I’ve heard at home for as long as I can remember.

Featuring Nutini’s regular string players and a bevvy of brilliant backing vocalists, the album addresses subjects including Jordan’s upbringing, his struggles with his faith and, on Foreigner, a ballad that builds in to an epic immigration anthem, the racism he faced on moving to Britain from the war-torn Republic of Congo at the age of one, leaving his father and six half-siblings behind.

“My whole life I’ve never felt like I fitted in,” says Jordan. “Growing there were very few black families. I didn’t look like anyone else. I wasn’t allowed to play with the other kids.

“At school no one understood me because French was my first language. I learnt English very quickly, but if I spoke in English at home, my mum would tell me that I was losing touch with my culture. I felt torn between two worlds.”

Already his ear for music was obvious. Watching children’s TV shows, he would sing back the theme songs without missing a note, to his mother’s astonishment. By four, he was mimicking his mum singing in church and, at home, entertaining her with renditions of Motown, Michael Jackson and Whitney Houston songs.

At eight he was writing poetry and by 12 setting it to songs written on an acoustic guitar he’d got for Christmas. Out of his mother’s earshot, he was also falling for hip hop, sneaking in to the living room to listen to Jay-Z, Wu Tang Clan, Busta Rhymes, Missy Elliot and more.

Moving to Coventry for secondary school when his mum got a new job, Jordan shone at music and performing arts. He joined a youth club where where he became the go-to guy to lay down vocals for local DJs and rappers and won a place to study popular music at Northampton University.

There he fell for indie-rock and formed and fronted his first band. Briefly he thought rock might be his calling, but in his final uni year found himself turned on to folk by James Vincent McMorrow, Ben Howard and Nick Mulvey and began making regular trips to London to perform at open-mic nights.

“I was like a sponge soaking up all these different types of music,” says Jordan. “I didn’t think in terms of genre. I just loved being moved by music.”

“Physics was recorded in various places, from the basement studio at Universal to a mate’s garden shed,” says Jordan. “It was folky but also influenced by me rediscovering the classic soul that my mum had played me as a kid.”

From the moment Physics appeared in 2016, Jordan’s ability to connect with an audience was obvious. "Yours To Keep", the EP’s stunning centrepiece, soared on Spotify having featured on New Music Friday, and saw the newcomer compared to Michael Kiwanuka and Marvin Gaye.

By 2017, Jordan had moved on from acoustic singer/songwriter by fusing his folky soul with the funky rhythms of his Congolese roots and influences from both indie and grime. 2018 saw yet another leap on with the release of the stunning Cam Blackwood (George Ezra, London Grammar” produced single "One In The Same", which set a plea for human interaction in tech-obsessed times to his sunniest song to date.

Performing "One in The Same" at festivals resulted in a revelation – the once smartly dressed singer abandoned his suit jackets, trademark fedora and shiny shoes. In his everyday clothes – t-shirts, trainers, a now omnipresent beanie – he felt a new-found freedom on stage.

“I call it the day I chose to change hats,” laughs Jordan. “I was at a festival in Germany and decided I didn’t want to wear a crisp, white shirt anymore. It was hot and I was tired of changing. What I realised was that I no longer needed a stage persona. I had to be the real me.

“That goes back to my love of grime – artists like Skepta, Little Simz, Wretch 32, Ghetts, Kojey Radical... too many to mention. I love their honesty and attitude. They encouraged me to ignore what other people thought and ultimately believe in myself.

“That gig was by far the best I’d ever played. I had never felt more comfortable on stage or more connected with a crowd. It was as though I was starting over, as a new man and a more confident musician.”

The new Jordan was finally ready to record his debut album, but first he had to find the right producer. Top of his wish list was Dani Castelar. At a studio in Valencia, the pair hit it off straight away.

“We’d talk about music for hours while eating incredible tapas,” says Jordan, a long-time Nutini fan. “Dani helped me hone my sound but mostly he encouraged me to do what felt right. He taught me to ignore rules and go with my gut.”