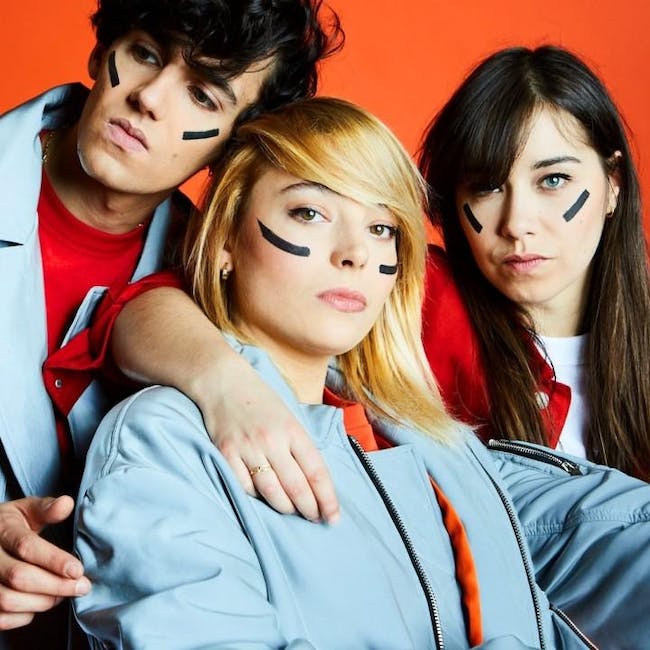 In 2016, those who did not know them yet would discover Hyphen Hyphen on the prestigious Victoires de la Musique stage for an explosive performance of the single "Just Need Your Love." The group had just won the Best New Live Act Award. A logical coronation for the young 25-year old French artists, who have become masters of the art of embracing the crowds during intense concerts. Hyphen Hyphen has a track record of several hundreds of dates in the biggest venues and festivals.

HH the newest chapter of Hyphen Hyphen's discography is composed, but also entirely produced, by the band. Not a surprise coming from those Art school graduates designing also their own artwork, shows and music videos.

An impetus and a wild strength, are across all the new compositions of the trio. HH is a grand, lively album; one in the form of a slap (and we're asking for it again): free in the way it draws on all the genres.

It draws equally as well on the groove of RnB as it does on the immediateness of pop or the trance of UK House. A logical eclecticism for a group whose musical hall of fame brings together artists as varied as Kanye West and Chopin, Destiny's Child and B.B King. A great album too, in the way it puts together lyrics rich in meaning.

Hyphen Hyphen do dance for sure, but with their heads full of everything which has made up this zeitgeist: sexual freedom, a quest for intoxication and feminism.

Although the group took sole responsibility for the production of its album, Hyphen Hyphen was also able to surround themselves with the best: HH was recorded in the Parisian studio of the Air musicians (Atlas studio), where the group was able to make the most of a vast choice of synthesisers and the participation of the drummer, Zoe Hochberg.

To perfect her voice, now capable of remarkable acrobatics, Santa called on the talent of the American Guy Roche, the regular vocal coach of !he greats (Beyonce, Mariah Carey, Christina Aguilera, etc.).

The mixing of the album was entrusted to Maxime Le Guil, already behind atbums by Justice, Radiohead and Morrissey, and the mastering was entrusted to Vlado Meller (an impressive CV from Kanye West to Frank Ocean, by way of Michael Jackson). Strengthened by this star casting and the immense talent of its authors, HH is an album that is at once powerful and undefinable, which goes straight to the heart.