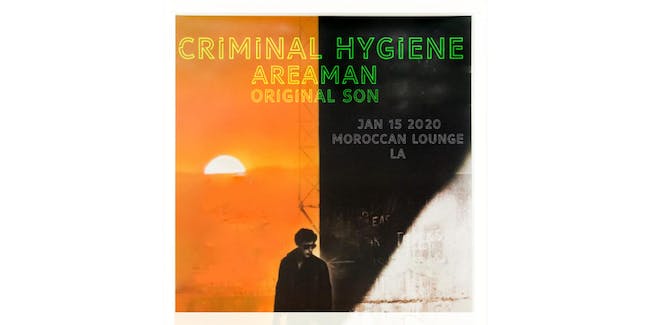 It can be all kinds of thankless, this rock band thing. It’s not just one big party. It’s a hard job. The odds are stacked against you. And reward can be fleeting. But still, knowing all that, there’s nothing else the boys in Criminal Hygiene would rather do.

Formed in 2011, Criminal Hygiene are a Los Angeles-based quartet comprised of founding member Michael Fiore (vocals, guitars, keys), Michael Hiller (vocals, bass, guitars) and Sean “Birdman” Erickson (drums, percussion) and bassist Cameron Ward. Fiore handles the lion’s share of the songwriting though Hiller is responsible for several gems too. Over the period of a couple years, they wrote-recorded-practiced and performed their asses off, releasing 5.5 singles, an EP and an album. They’ve played literally hundreds of local shows as well as 60-some national dates with the likes of Twin Peaks, Together Pangea and The Whigs, among others. In early 2018, they caught the ear of venerable indie label, Dangerbird Records and were quickly signed. Their 2nd album, Run It Again, is set for release March 1st, 2019.

Run It Again is a 10-song album that shines a fresh light on a raw sort of garage rock, full of melody, smart lyrics and hooks for days. Recorded at Future Shock studio in LA, produced by Alex Newport (Death Cab For Cutie, Frank Turner, Bloc Party), there’s an artful flow to the collection of songs. Though the band recognizes that for many listeners these days it’s an a la carte world, Sean Erickson (SE) states, “We put a lot of thought into the song order.” And it must be said – these guys really know how to sing. In particular, lead vocalist Michael Fiore seems able to effortlessly cram or stretch syllables at will.

When it comes to influences, how much time you got? MF: Everything from Johnny Thunders to The New York Dolls, The Clash and Wire. Television and Richard Hell. Minneapolis stuff like The Replacements, Husker Du, The Suicide Commandos and The Suburbs. Big Star. Guided By Voices. Fleetwood Mac. Fugazi. The Pixies. Nirvana. Pavement. The Shins. Wilco. Marshall Crenshaw. Tommy Keene. And all cite the Classic Rock they heard via their parents.

With the current, often bewildering, state of the music business, it’s impossible to say how an album like Run It Again will be received. Fortunately, because of the autonomy of the internet, business machinations and hurdles no longer rule the masses. The quality of Criminal Hygiene’s writing and performances is sure to be recognized by the portion of the global music community who listen carefully, however large or small that may be. After all, it’s an empirical fact that the cream always rises to the top, isn’t it? And that’s something we can all be mighty thankful for.