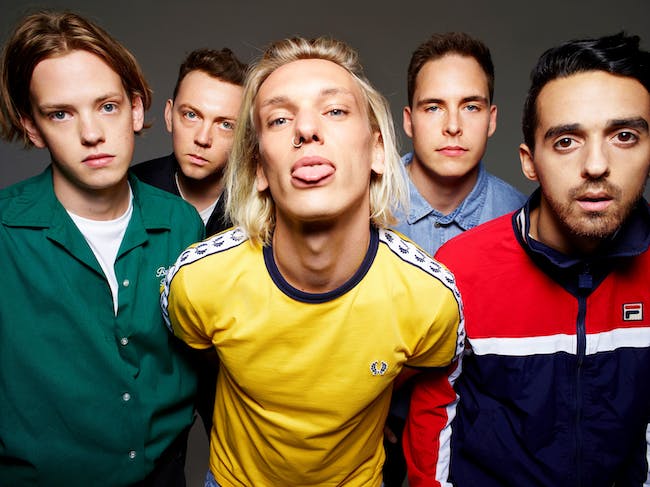 Delivered with relentless urgency, raw power-pop bombast, massive melodies, and grand ambition collide in COUNTERFEIT., a band with a moniker that cleverly subverts their remarkably pure authenticity. There is nothing fake about this transcendent powerhouse of passion and sweat. COUNTERFEIT. combine visceral risk-taking groove with a sizeable theatricality, brilliantly stomping through punchy rhythms with grace.

Overflowing with a wit and wonder drawn from a deep well of yearning for genuine connection, the upstart quintet builds community from the bitter ashes of solitude. This band transforms dissatisfaction, depression, and anxiety into empowering new anthems. COUNTERFEIT. is equal parts emotional exorcism and optimistic celebration.

Born from the DIY club circuit, driven by ferocity, and hailed as emerging heroes and onstage mischief-makers by the UK rock press before they’d ever crossed the pond, COUNTERFEIT. are newly aligned with Lava Records and ready to conquer the world.

Less than four years ago, COUNTERFEIT. sold out London’s 02 Academy Islington with just one EP under their belts, a 3-song musical Molotov cocktail with the fittingly provocative title Come Get Some. Surrounded by his brother Sam Bower (guitar/vocals) and their comrades Roland Johnson (bass/vocals), Tristan Marmont (guitar/vocals), and Jimmy Craig (drums), audiences marveled as frontman Jamie Bower leapt from stage to floor and back again, spending nearly half of the group’s electrifying gigs performing from the crowd. Meanwhile, the pages of print magazines and the social posts from newly minted fans cast the band as rightful heirs to the UK’s storied rock and punk history.

COUNTERFEIT.’s sweetly savage full-length debut, Together We Are Stronger, was praised by Rock Sound for its “shedload of riffs” and saw the band’s charismatic vocalist/guitarist named one of the 50 Greatest Rock Stars by UK tastemaker Kerrang!.

Tours across Europe and North America; buzzed about performances at major festivals like Reading & Leeds, 2000 Trees, and Slam Dunk Festival; a 2016 Kerrang! Award nomination for Best British Newcomer; and a 2017 Best Live Band win at the AIM Awards; that 2017 debut album: it’s all coalesced into a bold new mission statement.

If there’s a singular theme throughout the band’s 2019 sophomore record, a chrysalis shattering creature that’s evolved far beyond the teeth-kicking sonic assault of their debut, it is the insistence that we need not suffer in silence. We are not alone. COUNTERFEIT. songs champion resistance to the confusion, isolation, and bewilderment of modern life. This music is the sound of strength made from the throes of adversity.

“It Gets Better,” the album’s first single, is a doggedly optimistic melodic battle cry, with Bower delivering the sweet line, “believe me my sister, there is hope for us” as though his very life depends on it. It was partly inspired by someone he met on tour who he describes as his doppelganger. It’s a clarion call to her and all likeminded listeners. “Writing the song ‘It Gets Better’ was a real journey from self-obsession, feeling oppressed by my surroundings and my reaction to my surroundings, to opening myself up to the idea that everything can and does truly get better,” he explains.

The stripped down swagger mixed with mellifluous grandeur of “It Gets Better” is the kind of soulful missive that’s virtually part of the band’s DNA. After all, Bower’s parents took him to see the legendary Oasis gig at Knebworth before he’d even reached double digits and he still plays the Gibson Les Paul he’s loved since he was 15.

“When I pick up my guitar, I should either want to kiss and hug it or I should want to break its fucking neck.” That juxtaposition is all over their new album. There’s the Placebo-esque sheen of “Paralyzed” and “Getting Over It”; the socio-political determination of “11:44,” a song that’s at once driving and danceable, with an anthemic chorus; the moving and altogether haunting balladry of the dreamy “Lack of Oxygen.”

As Bower sees it, COUNTERFEIT.’s second album confronts the bittersweet spite of their first record with expansive sounds and a bigger worldview. “I don’t want to sit and dwell in that angry, pissed off place. I’m pulling myself up and trying to share that hope that none of us have to live there. We don’t have to continually exist in that place. If we build a community out of love, we’ll be okay. It’s a release. It’s catharsis.”

COUNTERFEIT. embodies the boundary smashing spirit of Vivienne Westwood; the vivid imagery of the dark romantic poets who clawed against despair; the sweat and spit of vintage punk and hardcore; the radio-ready, confident triumph and bravado of Britpop. Timeless components, assembled into something new, through this generation’s prism.

“We hope to inspire people to examine themselves, to talk with their friends about what it is they’re feeling,” Bower says. “Certainly there’s more to life than ‘status’ and success at all costs. I’m looking for as much spiritual connection between people as I can get. I want honest, raw emotion in my interactions. In this world where we are becoming vastly more connected technologically yet more disconnected spiritually and emotionally, we truly believe that music can help to draw us closer.”

Hailing from London, punk-rock outfit Counterfeit. are Jamie Campbell Bower, Tristan Marmomt, Roland Johnson, Sam Bower and Jimmy Craig. Last year they unleashed their debut album ‘Together We Are Stronger’ via Xtra Mile, which is full of punk-rock flair and showcases front-man Jamie Campbell Bower’s raw and honest vocals. The 10-track record garnered widespread acclaim from both fans and critics alike, including Kerrang! where front man Jamie graced the cover around the album’s release, Rock Sound, Upset Magazine and Radio 1’s Rock Show with Dan P Carter. Nominated for Best British Newcomer in 2016 at the Kerrang! Awards, and winning Best Live Band in 2017 at the AIM Awards, the 5-piece have gone from strength to strength since exploding onto the scene in 2015. Having played sold out shows up and down the UK, Europe and now the U.S, Counterfeit. are no stranger to the live circuit with numerous festival appearances such as Reading & Leeds, Slam Dunk, Hurricane and Southside, and many more. Counterfeit. are currently holed up writing and recording the follow up to their debut album due in mid 2019....