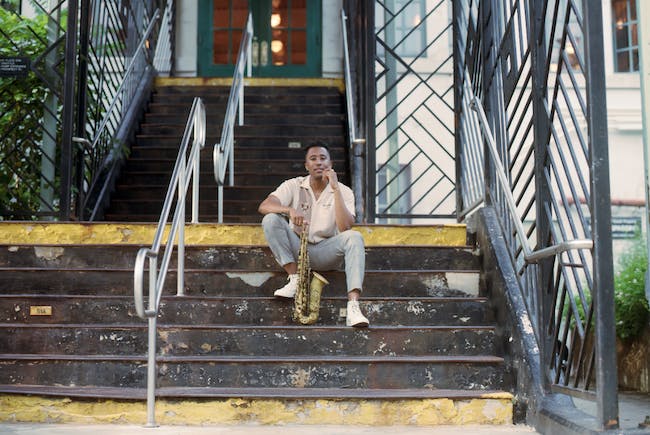 Braxton Cook is one of this generation’s most exciting emerging voices in the jazz world. Not only does he exhibit world-class virtuosity on the alto saxophone but he is also a uniquely talented vocalist and songwriter whose sound blends Jazz, Soul, R&B, and Alternative music into a fresh new sound all his own.

Upon moving to NYC, and just a freshman at The Juilliard School, Braxton met Grammy Award-nominated trumpeter Christian Scott and became a long term member in Christian’s band honing his skills on the road. He also toured and performed with Christian McBride Big Band and Marquis Hill among others. During this time Braxton was also selected as a semi-finalist in the 2013 Thelonious Monk International Jazz Saxophone Competition.

The following year Braxton released his debut EP Sketch (2014) and sophomore release Braxton Cook Meets Brown (2015) launching his solo career and bringing him festivals and venues across the country. In April of 2017, Braxton released his debut album Somewhere In Between, which allowed Braxton to tour both nationally and internationally to the U.K as well as Japan. In less than a year, Somewhere in Between as well as the Somewhere in Between Remixes & Outtakes albums have amassed millions of streams and downloads on Spotify and Apple Music and has been praised by peers, musicians and critics alike. Saint Heron noted Cook’s demonstration of “unmatched flexibility by merging multiple genres into an ardent, passionate and soul-filled project.”

Outside of the Jazz sphere, Braxton has worked alongside Rihanna at the 2016 VMAs and Solange Knowles; contracting the horn players involved in her live shows at the Guggenheim, Radio City Music Hall, Afro Punk Festival, Panorama Festival, and Made in America Festival. Most recently, Braxton was featured on Tom Misch’s 2018 U.S. Domestic Tour which started with a 2 performances at Coachella and culminated with a very special Tiny Desk performance.

Braxton has most recently released his sophomore album entitled No Doubt (2018) which debuted at #2 on iTunes Jazz Charts and amassed 1M streams in its first month. He embarked on his first international headlining tour in November of 2018, performing at Tourcoing Jazz Festival, So What’s Next Jazz Festival and the legendary Ronnie Scotts Jazz Club in London, U.K. Now working on his third project which is set to release Fall 2019, Braxton is excited to continue expanding his musical concept and growing his fan base worldwide.